The UX specification (specs in short) is a document to record how UX decisions are made and to track & measure usability metrics. The process of documentation provides an opportunity for the designers to evaluate their decisions and create measurable UX goals that can validate their design via user testing.

Due to the growth of Later, having concise, proper documentation is an integral part of communication. This has become more important as we are now 100% remote as a result of the COVID-19. The UX specs is aiming to provide clarity in UX decisions by stating the whys, the whats and the hows.

A little bit about Later teams

Later have grown from 20 to 100 staff in the past three years (we are hiring!) Knowledge sharing has become an area of focus. We believe accessible information will ensure clarity in our communication, which is a main driver to collaborate better. This is why Later uses Slack, Notion and Google Suite Products to ensure the right people can access the right information.

The overall design and build process of a feature is based on the following team structure.

Later is a relatively flat company. UX Designers (UXD) is under the Product team.

A little bit about the process

All feature specs are created in Notion by the Project Owners. They will work with
the CEO / Head of Product to outline the business goals that are driven by data. The specs will include user stories, acceptance criteria, links to related documents, customer feedback that support the business goals, and any additional relevant information. The primary goal is to ensure the whys, the whats, and the hows are clearly stated. This way we can get better team alignment.

The specs will be reviewed and discussed in a kick-off meeting that all key stakeholders from the four teams will participate. All discussion and decisions will be documented for references. As more people are involved, the list of technical decisions and concerns have also grown. 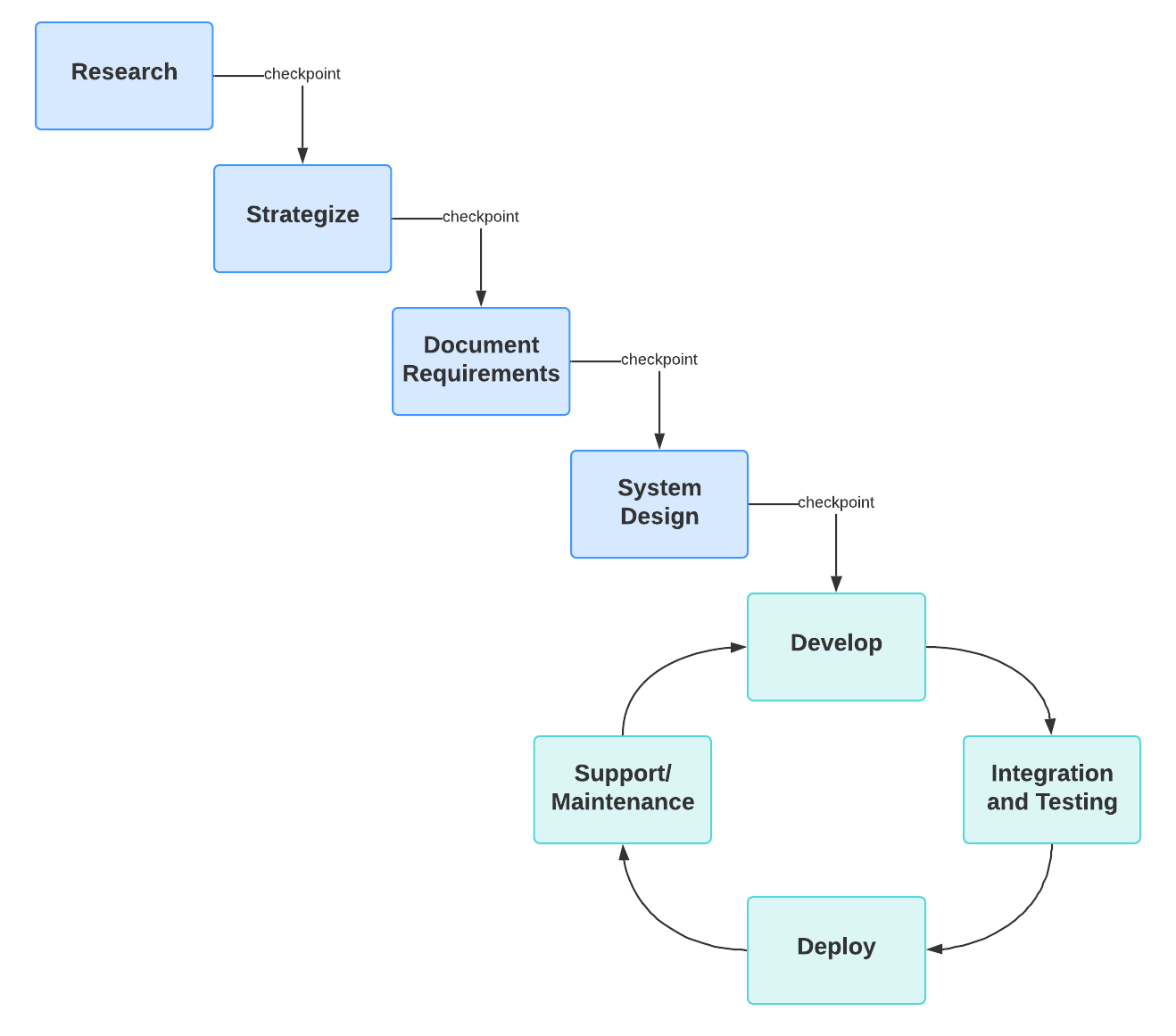 At Later, we adopt the Agile-Waterfall hybrid method. This methodology encourages iterated approach in design and software development. Being nimble is one of Later core values so the agile mindset is a perfect match.

Note: Later has added an agile component to the Document Requirements step. The goal is to collect insights from other teams that encourage collaboration earlier in the process.

As mentioned, accessible information is an integral part of maintaining good communication. Good communication is the foundation of successful collaboration especially in the remote environment. It is clear to me that the UX team will need to share the design process in a concise document, which is the UX specs.

Aside from the stated benefits, I also see the UX specs is a platform to share the Later UX Principles (a high level UX guideline that I have worked with the CEO) with the rest of the teams. Using a shared set of UX principles will encourage team alignment in the early design process as well as advancing Later's UX maturity as a company. Ultimately, the goal is to ensure Later deliver the best possible experience for our customers.

To summarize, there are four primary goals:

I am unable to show the entire UX specs due to NDA. I can, however, share the general template and one section.

Each specs will have four sections:

Under each section, there is a to-do list to help UX designers organize the necessary task in order to complete the section correctly.

* Octalysis Analysis is a framework developed by Yu-kai Chou. It is an excellent way to understand people motivation. It is a great tool to develop human centred design that influences your customers behaviour. 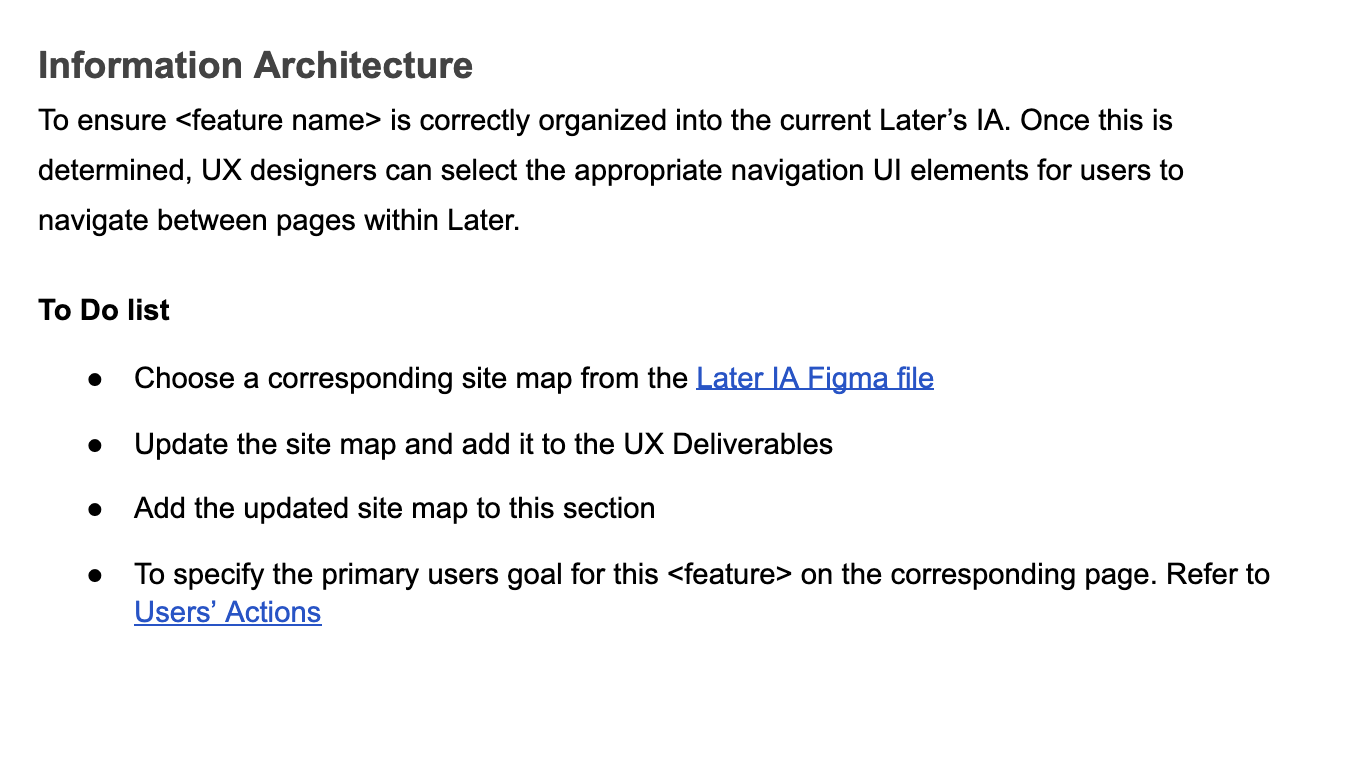 Each section will have a brief description to reiterate the purpose. There is a specific To-Do List corresponds to each section.

Make sure it flows

Each new feature will need to be considered how it fits into current Later's information architecture. This is an important component of a good user flow. 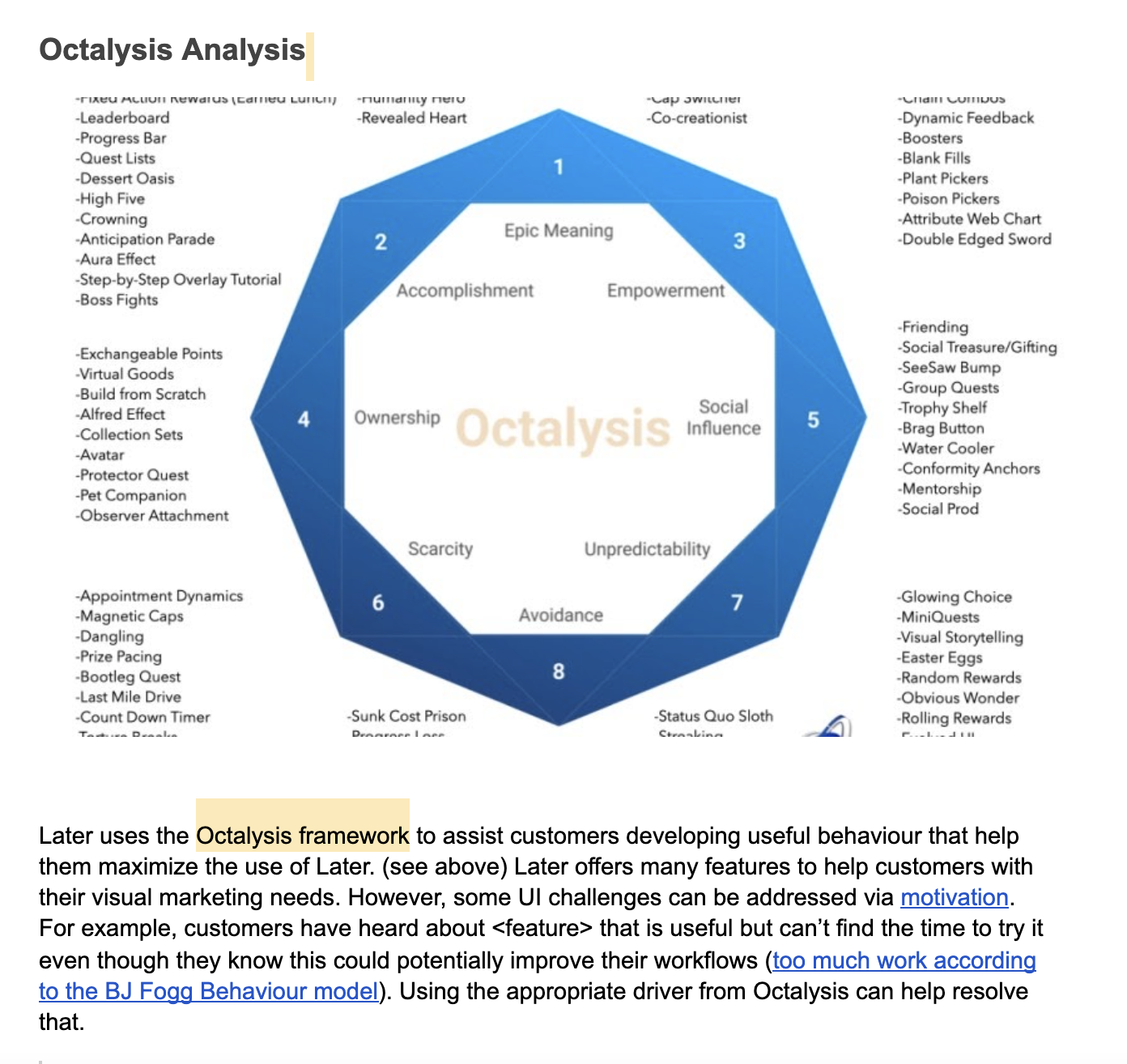 Ease of use is one of the UX metrics that Later measures. However, there is a lack of qualitative approach to define and determine what it is exactly. Leveraging the Octalysis framework and the BJ Fogg Behaviour model, the UX team is now equipped with a tool that can explain the ease of use in a consistent and concise manner.

The impact of UX specs is still yet to be determined as it was just completed two weeks ago. In order to prevent confusion, Later does not introduce any changes to the process in the middle of a product cycle. Nonetheless, the act of writing the UX specs provides myself the chance to reflect on the current design process. It also assists with understanding the needs of other team leads. This allows me to make the necessary adjustments that will improve the current collaboration experience.